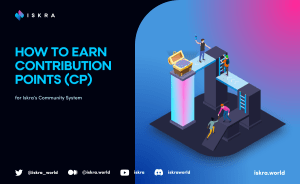 The Iskra Community System is a fundamental part of its overall ecosystem, and its unique structure allows participants to enjoy various benefits and share in the overall value created by the platform.  The ultimate goal is to distribute up to 100% of all platform fees collected from the community rewards pool to the community system participants who operate a network node, stake, and simply use the platform.

Current Pioneer NFT (P-NFT) holders that have staked their P-NFTs since June 30, 2022 have earned 60,000 CPs for every P-NFT staked. If they have referral bonuses, they would get an additional 10% boost, which is currently at 6,000 per referral and may change in proportion to the P-NFT’s CP.

Below is the current milestone schedule for implementation. Please note that these are subject to change depending on development and other planning decisions, as well as Iskra governance and voting.

Establish your headstart when you start earning CPs now. Visit our blog and whitepaper for details.