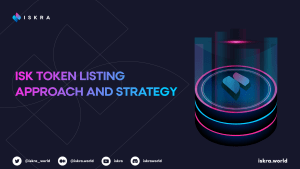 ISK Token, the governance token of Iskra Platform and the key currency of its ecosystem, will debut on one of the leading global exchanges, Gate.io on September 29, 09:00 (UTC). This blog shares the thought process of considering the current crypto market and Iskra’s token approach, behind the evaluation of several potential exchange collaborations, as well as the selection of Gate.io for the initial token listing, and the overall listing strategy moving forward.

Recently, the U.S. Federal Reserve has aggressively raised interest rates to try and counter inflationary pressures. This policy is expected to continue for the next few months or even years. While in recent years, there have been cases of 2 consecutive years of continuous interest rate increases, but the increases were not quite as  sharp or aggressive as the current environment. Terminal interest rates could continue to reach more than 4%, with the exact timing or final terminal interest rates remaining unknown.  It will be difficult to expect a crypto market rebound while interest rates continue to  rise  and the overall economy moves  downward.. It is widely hoped that the overall market will turn around in 2024.

Under the current market conditions, a token’s positioning strategy can be crucial to survive a bear market and prepare for a better economic environment.

In our analysis, well-known tokens could be categorized in terms of certain cycles:

Given the current situation, Iskra aims to position itself in the third category above.

Timing determines the success or failure of a business, especially for blockchain projects because they’re sensitive to the overall crypto market and price.

We think this bear market shifts the market trends from a time-critical to a quality-critical market.  Now, it is important to manage cash, invest wisely to build a robust business until the next bull market. Iskra has the resilience and the capital to carry out products and businesses by targeting 2024 at the coming 3rd Hype cycle.

When Iskra first set out its journey to mold the future of the all-new web3 ecosystem with its project milestones and roadmap, we targeted the second quarter of 2022 for the initial listing. However, we had no choice but to delay it to 3Q as the market was hit hard by the Terra (Luna) Crash that had not been expected . To make matters  worse, market volatility in general was not limited to the crypto scene but also macroeconomics overall with unstable exchange rates and stock market prices bled into the 3rd quarter.  Against this backdrop, instead of postponing the listing and hoping for the bull market to return, we decided to press on with our roadmap and focus on developing our platform at the risk of  forgoing potential immediate listing gains. Team Iskra did not limit the project to short-term success, and instead wanted to focus on rolling out the ecosystem as a long-term goal.

The Pioneer NFT (pNFT), the core element of the Iskra Token economy, is on a solid sales growth track, close to selling out the initial limited release.  Establishing a token price at this point  may prove  helpful to boost pNFT sales and contribute to the overall  value for  holders.

Given current market conditions, another contributing factor for the Token Generation Event (TGE) was that the listing itself will help the ISK Token take the first step toward the launch of other Iskra platform products in September: upgraded Wallet features and initial DEX functionality.

Lastly, while corporations need to be listed on the stock market at a certain level of success achieved, we think tokens should have different mechanisms versus corporation. It needs to open to the public at the beginning of the business and requires a year or two of market experience to be a successful project for the long journey.

What was the Exchange Selection Process?

Team Iskra has been actively engaged in discussions with the top 10 global exchanges based on CoinMarketCap and CoinGecko since the first half of 2022. Exchanges were considered based on the following criteria by evaluating:

Based on the above, the team has strategically communicated and negotiated requirements and terms with multiple exchanges. In the end, Gate.io, was selected because reasonable terms and solid working relationship  for the success of the project

What Does the Future Hold?

The initial listing on Gate.io was just the beginning.  Future listings on strategic exchanges will be the next milestone on the ISK token journey.

In order to ease the technical barriers of listing and to facilitate purchases, ISK tokens will be listed as ERC-20 base and we will roll out the bridging service between Klaytn and Ethereum for the transferability of the tokens.

Continuing to build a robust track record in delivering products and meeting milestones is important in order to list on future top tier exchanges. We foresee adding similar top-tier global exchanges like Gate.io before year end, as we march towards highly strategic listings on global and various fiat leading exchanges.

Iskra is committed to deliver next-gen web3 games with seamless blockchain services, while distributing overall value creation to its stakeholders based on their participation. The ISK token is a major part of this vision, and has officially started this segment of Isrka’s overall journey with the initial Token Generation Event on September 29, 2022.