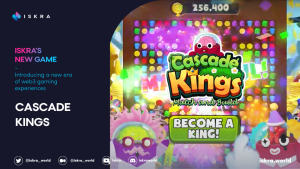 Iskra has partnered  with Rich Alien, subsidiary of 111% (developer of Random Dice Defense), to develop Cascade Kings, a  Match 3  puzzle game logic with a blockchain ecosystem.

Rich Alien and Iskra are set to launch Cascade Kings in the first quarter of 2023, available on mobile phone (APK).

Rich Alien is a subsidiary of 111%, developer of global-hit Random Dice Defense. Having over 11 million downloads worldwide displays 111%’s ability in creating Random Dice a fun game with intriguing game mechanics”. Since Rich Alien is established as 111%’s blockchain-dedicated subsidiary, Iskra believes that Rich Alien has a high interest in and understanding of blockchain games. With Rich Alien’s ‘FAST IT’ strategy, dedication and confidence to develop new games, and know-how and ‘effective game rules’ from parent company 111%, we Iskra strongly believe our partnership with Rich Alien will create positive synergy for both Iskra and Rich Alien as we encourage our partners to create their own ecosystem, like we support Grampus’ Cooking Adventure – Norma in Metaland and HDLABS’ Three Kingdom Multiverse (3KM).

Aiming to make Cascade King more than just a Match 3 puzzle game with a battle system, Rich Alien develops high-quality contents such as base building, saga progression, collection of ultra-rare (UR) character cards, and epic PvP gameplay that involves attacking and stealing coins from your friends. Most importantly, Cascade King’s main content is the ranking battle system, which offers both the intrinsic entertainment of a puzzle game and intense and hand-wringing joy of ranking matches. Notably, as players make progress in ranking, they earn crypto rewards; the higher the ranking, the bigger the rewards.

Players can breed various skill characters that generate additional buffs during puzzle matches and trade with NFTs. To progress further and become top rankers, players can also use crypto to buy skill character NFTs that generate even more powerful buffs and skills. Additional contents will be available through integrating with the blockchain ecosystem in the future, including the trading system using NFTs that will be added soon.

In Cascade Kings, players can enjoy the thrill of ranking matches as well as the exhilaration from winning a higher rankings and level-based rewards. There are many features that will be upgraded for players to both play and earn in the near future.

Please make sure to check out our News section here for the latest updates here.