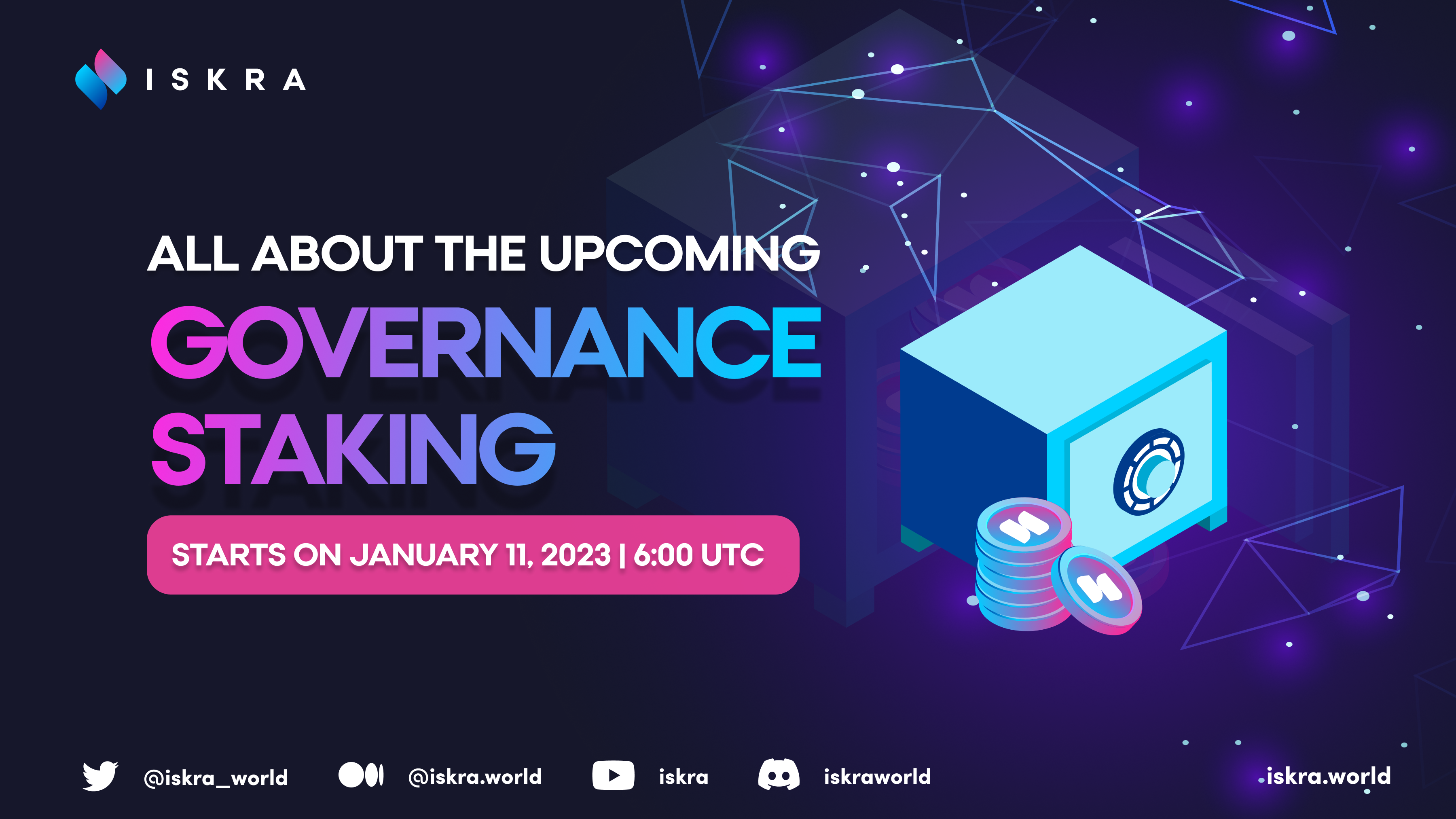 Iskra recognizes the crucial role that the community plays in the growth of the whole ecosystem, and we’ve made it a part of our tokenomics to give our users the power to set the path ahead of us through governance participation.

Today, we’re excited to share that we have made a significant step forward in realizing this goal by launching the Iskra Governance Staking early next year. It will be deployed on the Klaytn network and will officially start on January 11, 2023 at 6:00 UTC.

What is the Iskra Governance Staking?

The Iskra Governance Staking empowers our users to eventually have a say in how we define the future of play.

By staking ISK, our users can enjoy the following benefits:

Period – The staking period of the Iskra Governance Staking is flexible, which means you can stake and un-stake anytime. However, your staking reward will be subject to factors such as the length of time you’ve staked and the ongoing exchange rate at the time you un-staked.

Participants – There are no restrictions as to how many users can participate in the Iskra Governance Staking. However, the minimum amount that can be staked is set at 1 ISK while the maximum is set at 1 billion ISK.

While staking may differ from one project to another in terms of type, network, lock-in period, etc., it essentially involves the user depositing their crypto holdings to a network or a project.

Once they do, their staked holdings are considered as their participation in helping with the network’s validation process, or governance as in Iskra’s case, and in return, stakers receive staking rewards.

For every ISK token that you stake, you will be issued a corresponding number of sISK that represents your staked holdings. Depending on the applicable exchange rate, the sISK that you hold also corresponds to the amount of ISK reward you can receive.

During the pre-staking period when rewards are not yet distributed and compounding does not start yet, the ratio of staked ISK to sISK is 1:1.

The ISK staking reward you will receive will be based on the number of sISK you will un-stake (the sISK you un-staked will be burned).

The reward amount is computed by the second and distribution begins once the Iskra Governance Staking officially commences on January 11, 2023 at 6:00 UTC.

For 24 hours before the Iskra Governance Staking will officially start, pre-staking will be opened to allow ISK holders to stake their tokens earlier and receive sISK at 1:1 ratio. You can check out this article on where and how you can buy ISK.

Staking rewards will not be distributed yet during the pre-staking period, but the sISK that you hold is an interest-bearing token, which means its value reflects the interest income you earned for participating in the Iskra Governance Staking.

As an additional incentive for participating in the Iskra Governance Staking, every sISK that you hold will have a corresponding contribution point (CP) at 1:1 ratio. However, you must take note that these CPs are dependent on the number of sISK that you hold.

Here’s an example of what you can expect once you stake and un-stake your ISK under the Iskra Governance Staking:

During Pre-Staking – User A stakes 100 ISK and will receive 100 sISK that represents how much he staked. He will also receive 100 CP based on the number of sISK he holds but he will lose this CP the moment he un-stakes sISK.

During the Staking Period (Reward Distribution + Compounding Also Begin) – User A stakes 100 ISK but the amount of sISK he will receive is not anymore 1:1 but is instead based on a decreasing exchange rate as the value of sISK increases over time. Thus, if the exchange rate at the time User A staked is 1:0.8, he will only receive 80 sISK + 80 CP for staking 100 ISK and so on.

We hope this provides a clear picture of our upcoming staking program, and watch out for another blog we will publish later on to walk you through the actual process of staking and un-staking. Stay tuned for that and happy holidays! 🎄

Iskra offers a premier destination for players and game developers to explore the thrill and opportunity of Web3 gaming alongside a vibrant community.

As part of its mission, Iskra aims to mold a Web3 future by creating a forward-thinking dedicated home for Web3 gaming and giving every user a stake in the company’s success. It is committed to becoming a leading platform for blockchain gaming.